Where to stay in San Sebastian

San Sebastian has a decent selection of places to stay, ranging from surf hotels to wallet-friendly pensions to fancy hotels if you want to treat yo’self.

If you’re on a tight budget, two great hostel options are Koba Hotel and Koisi Hotel. Koba is located in the Gros district, a neighbourhood packed with hipster hangouts and cheap eats. Thursday nights in Gros are particularly epic, because loads of the pintxo bars take part in Pintxo-Pote, where you can get a pintxo (like a tapa) AND a house beer or wine for €2. Yes, €2.

Koisi Hotel is on the other side of La Concha Bay, close to Ondaretta Beach and the Mount Igueldo funicular. They’ve got dorm and private rooms to choose from, all super modern and comfortable.

If you’d like more privacy, San Sebastian has loads of pensións, which are basic hotel/guestrooms that won’t break the bank. Check out Pensión San Jeronimo right in the city centre, or Hotel Record if you’re keen to be close to Zurriola Beach, the town’s main surf spot.

How to get around

San Sebastian is fairly small, and very easy to get around by foot. If you’re keen to get somewhere faster or want to explore the outer neighbourhoods, I’d recommend hiring a bike or e-bike and taking to the city’s bike lanes.

There are buses available but you’re unlikely to need these to get around the city itself. If you’re looking at doing one of the hikes near San Sebastian then the buses or a rental car may come in handy, but traffic and parking in San Sebastian itself is notoriously frustrating.

If you’re tacking San Sebastian onto a Spanish road trip, look at staying outside of the city centre on a bus route. This way you’ll get easier/cheaper parking, plus save money on the expensive inner city accommodation. Win win!

How much to budget

Before my trip to San Sebastian, I naively assumed that it would be cheaper than Barcelona and Madrid, since it’s a smaller city. Boy, was I wrong.

San Sebastian is known as one of the glitziest parts of the country, a reputation given to it way back in the early 1900’s when the Spanish royal family made it their favourite vacation spot. Since then it’s expanded from a beach town to a luxurious holiday destination, complete with fancy restaurants, fancier hotels, designer shops and beauty spas galore. Great for anyone with money, not so great for backpackers like you and me!

But the good news is that it’s still possible to do it on a budget. As with any European city, first of all I’d recommend doing a free walking tour to learn a bit of history and culture, as well as get your bearings, without breaking the bank. The best San Sebastian walking tour is with Go Local, a bunch of local legends who focus on ensuring the city’s tourism industry stays sustainable. They work on a tip-only basis so pay what you feel the tour is worth at the end. Generally I pay about €10 for walking tours in Europe, maybe €15 if I was really impressed.

Food in San Sebastian is the main culprit to your budget, but the good news is that it’s absolutely worth it. I’d budget a minimum of €20-€25 for food each day if you’re eating super cheaply (€3-5 breakfast, €8-10 lunch, €10 for a cheap dinner), and at least €40 if you’re planning on a night out or nicer meals.

You won’t spend much (if anything) on transport aside from getting to and from the airport, and there aren’t many paid experiences or activities unless you’re going to be hiring surf gear, which brings me to…

The best things to do in San Sebastian

Whether you’re a seasoned pro or a brand new beginner, you can’t visit one of Europe’s best surf spots without trying to catch a wave. Zurriola Beach is the surf beach of choice for most locals and travellers alike, and for good reason.

It’s a long beach so there’s generally plenty of room, but it can get crowded in the summer holidays. You can rent a board from one of the many surf shops along the beach’s main boulevard, and there are a bunch that offer private or group lessons too. I’d suggest checking out Zurriola Surf Eskola if you’re keen to book a lesson.

My absolute favourite way to experience a city is by planning my very own food crawl. It’s like a pub crawl, but instead of drinking, I just eat one meal at every place I visit! San Sebastian is the perfect location too, because you can try small pintxos at a pintxo bar, eat it in a couple of minutes and then move on to the next one.

The best food in San Sebastian deserves a full blog of its own (or a book more like!) but some bites you just can’t miss are: cheesecake from La Vina, avocado toast at Sakona, pintxos from Bodega Donostiarra and traditional Basque cuisine at the Michelin-starred Alameda.

After indulging in San Sebastian’s gastronomic delights, you might want (or need) a bit of outdoor exercise. Life’s all about balance, ya know. Lucky for you, me, and my wallet that can’t afford to buy a bigger pair of jeans, there’s a bunch of epic treks around the city.

For a quick burst of exercise you could walk to the top of Mount Igueldo, home to the city’s theme park and an insane view of La Concha Bay. Mount Ulia is another option, with a number of different walking trails depending on your fitness level.

More serious hikers could do the 5km hilly coastal trek to Pasajes, or 15km walk to Orio.

The city is also part of the Camino del Norte, which is a (relatively) short coastal variation of the Camino de Santiago pilgrimage trek, so if you’re looking for a full on multi-day or multi-week adventure, this is a fantastic option.

European history so often revolves around the Romans, the Ottomans, the Byzantines and other major empires, so learning about the Basque people and their history was honestly fascinating. And I’m embarrassed to admit I had never heard of them before!

The Basque people are indigenous to Europe, who live in the Basque Country which is located on and around the border of Northern Spain and Southwest France. There are about three million Basques, with the vast majority living in Spain, about 8% in France and some smaller Basque populations in the USA and Canada.

It’s hard for Basque researchers to prove exactly how long the Basque people have been around, but there’s evidence to suggest that the culture predates the arrival of agriculture in that area, which was over 7000 years ago. Yep, I’ll just let that sink in.

Another fun fact that I discovered, after practicing all my key Spanish phrases before my arrival in San Sebastian, is that they don’t speak Spanish. They speak Basque! Basque is a language isolate, meaning that there are no other languages related to it in the world. So save your holas and gracias’, and learn to say kaixo (ky-cho) and eskerrik asko (es-care-ick ass-koh) instead.

San Sebastian is the perfect summer break from the less-summery (sad face) UK, with huge stretches of beaches to find your perfect hang out spot for the day.

La Concha is the city’s biggest and most popular beach, with 1.5kms of fine golden sand, hundreds of stripey beach umbrellas and calm waves to jump around in. Rated as the second-best city beach in the world, this is the postcard-perfect icon that San Sebastian is famous for.

The sportier section of San Sebastian’s sandy coast is Ondaretta Beach, situated to the left of La Concha Beach before Mount Igueldo. If you’re always putting your hand up for competitive sports, this is your place! Join in with the locals for a game of beach volleyball, tennis or football, then hit the water for a quick bodysurf to cool down.

Zurriola Beach, as I’ve already mentioned, is the main surfing spot in town, and it’s worth a visit even if you’re not keen to actually get into the water. With bustling bars and restaurants lining this part of the coast, it’s no surprise this is the favourite beach for any local twenty-somethings to spend their days off.

Prefer your beaches to be a bit more secluded? Isla Santa Clara is the mass of land in the middle of San Sebastian’s main bay, and it’s home to a tiny 30m beach far from the craziness of La Concha and Zurriola. In summer there’s a ferry every half an hour to get you to and from the island, or you can rent kayaks from La Concha. If you fancy yourself as a decent swimmer, you might want to challenge yourself to swim to the island! It’s 500m but there’s floating jetties at the half-way point if you need a rest.

Is San Sebastian on your European bucket list? It should be! If you want to follow more of my adventures you can find me on Instagram and Pinterest or check out my blog here. 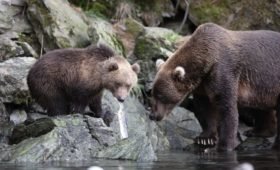 YOUR WEEKLY ADVENTURE AGENDA: EXPLORE THE USA FROM HOME I VolHotels