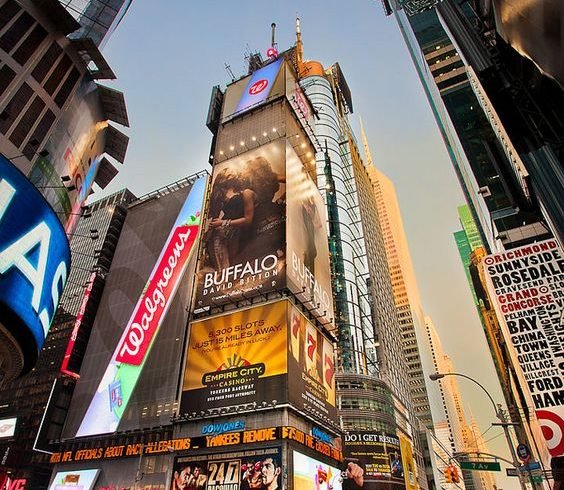 New York City comprises 5 boroughs sitting where the Hudson River meets the Atlantic Ocean. At its core is Manhattan, a densely populated borough that’s among the world’s major commercial, financial and cultural centers. Its iconic sites include skyscrapers such as the Empire State Building and sprawling Central Park. Broadway theater is staged in neon-lit Times Square.

New York is one of the most famous and popular cities in the world today. It is also referred to as the ‘Big Apple’. The city stands tall with its many impressive skyscrapers and statues. It has a unique fast paced atmosphere that shouldn’t be missed.

If you are travelling from outside the USA then flying is definitely the best option in terms of getting there. The city has three main airports named John F Kennedy Airport, La Guardia Airport, and Newark Airport. JFK is the main international airport. As the city is so big and popular it has excellent road networks and rail services, making all travelling options easy.

As you can imagine, New York has all kinds of accommodation that caters for a range of budgets. Many of the worlds most extravagant hotels can be found in New York. The most well known are The Crowne Plaza and The Four Seasons. For cheaper options try The Bronx, Brooklyn, Queens and Staten Island as they all have quality hotels for less but are slightly further way from the centre.

During the seventeenth century, the Dutch settled in the area and traded fur. The region was later colonized by the British who names it New York. In the following couple of centuries, millions of immigrants moved to New York and began bringing masses of money to the burgeoning city.

There is no shortage of sightseeing opportunities in New York. The City is packed with impressive buildings, museums and statues. The Empire State Building is possibly the most impressive feature of the city as well as The Statue of Liberty, and Central Park. The museums are also a must see part of the city. Be sure to visit the Whitney Museum of American Art, the Modern Art Museum, Guggenheim Museum, and American Museum of Natural History. Broadway is an impressive street with lights and the world’s most renowned shows happening on a daily basis.

Thousands of people travel to New York purely to go shopping. It is one of the top shopping places in the world. There are shops for everyone, whatever your budget. You can find designer labels as well as plenty of bargains.

The same goes for dining as it does for shopping. New York has heaps of great restaurants and dining establishments. They are scattered all over the city so you never have to walk far. A full range of international cuisine can easily be found. Nightlife in the city is amazing as there are bars and clubs to suit everyone.

Pacific
Fiji, a country in the South Pacific, is an archipelago of more than 300 islands. It's famed for rugged landscapes, palm-lined beaches and coral reefs...
View Details
Available through out the year:

Africa
Travel in South Africa offers an abundance of safari experiences, from lush subtropical beach forests to the exquisite seclusion of the desert to the world...
View Details
Available through out the year:

Europe 8 Days
25% Off
$ 600 $ 800
Paris, France's capital, is a major European city and a global center for art, fashion, gastronomy and culture. Its 19th-century cityscape is crisscrossed by wide...
View Details
Available through out the year: